In honor of this upcoming Father’s Day, we’ve asked some dads to write about what they LOVE about being a “dad of” autism. Our second entry is from AHSS’s Associate Chief Clinical Offer, Jennifer Lantham’s husband. In his own words: 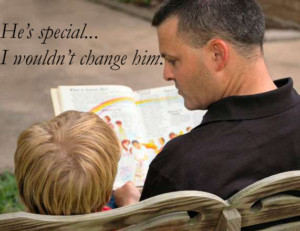 The biggest thing that I remember about having a child with Autism is that I didn’t know there was such a thing as Autism. It was the early 90s.

I knew that he was different but I didn’t know what kind of different or what his being different meant. I saw the strange speech patterns, the long time that it took for him to learn to talk, and the social differences. I used to watch him play with dinosaurs and he would hold them up to the side of his face very close and look at them out of the corner of his eye, and I thought that was very odd and not normal. I didn’t want to judge my child but at the same time there was a gnawing inside me that he was not “normal.”

I came to the conclusion that he was just different. We held him back a year from starting kindergarten. He actually did very well in school when he did start, but he didn’t have any friends:  no kids coming over, no sleepovers, no birthday parties. He was very, very solitary. I felt sorry for him and it’s hard to say that. But I did. He liked solitude and playing video games. He knew everything about video games and dinosaurs. It was his whole world. He didn’t seem to care if he had friends or not so that made it easier from my perspective. I rationalized that he was happy so it doesn’t matter if he doesn’t have friends like other kids..

I guess overall it was a lot of rationalizing and trying to come to a conclusion myself, not knowing what I was looking at.

It wasn’t until he was a teenager that I found out he had been diagnosed with Aspergers through his mother. His mother and I didn’t have the best relationship after our divorce, and we’ve never really talked about how he was different. Apparently she had had him diagnosed and I never knew.

Once I heard the word for the first time, I was able to read about it and understand. It was very sobering learning that I had been right, that my instincts were correct, that something was off.

But I’ve also learned that he sees the world in a very, very different way. It’s a very special thing.

He’s the kindest most caring person I’ve ever met. No ill will or mean thoughts or actions towards anyone that I’ve ever seen. It’s really amazing. I think he sees the meanness in the world and doesn’t understand it or comprehend it. And I think that’s an amazing thing in a way. I think people seem mean and callous and that he doesn’t understand why people act the way that they do. I think it’s easier for him to separate himself from it, because it is so foreign to him.

And then I think how special is that? He looks at what we call normal and in his mind, probably thinks that the normal people have a lot to learn.

He’s special. I wouldn’t change him.

Previous Post:   « Father’s Days can be tough, but we are tougher
Next Post:   A “Sprinkle of Special” for Father’s Day »