Are you interested in Mark Dixon’s PEAK methodology? Read a synopsis of his training by our Clinical Network Director, Erica Pozzie-Grant 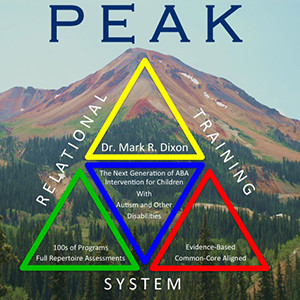 On September 18th, 2015, Dr. Mark Dixon (BCBA-D) captivated an audience of about 130 Chicagoland clinicians who were eager to learn more about Promoting the Emergence of Advanced Knowledge, or PEAK.  PEAK is an assessment and curriculum planning guide for teaching basic and advanced language skills.  The guide stems from Dixon’s interest in complex and often unobservable behavior.

Launched in 2014, PEAK is a four manual set that is blazing uncharted trails in the ABA world.  Dixon noted that some perceive PEAK as controversial, as it surpasses the long accepted account of verbal behavior as defined by B.F. Skinner in 1952; however, it is a new and novel approach to verbal behavior therapy going beyond basic requesting (mands), basic naming (tacts), and basic question answering (intraverbals) by teaching skills well beyond those found in Partington’s VB-MAPP or other similar assessment and treatment protocols.  PEAK equips  therapists with ways to build more complex repertoires that children need to effectively respond with understanding, to their environment.
The first manual is a direct teaching module that includes 184 lessons and is akin to existing assessments in terms of skills covered, followed by the second and third manuals which respectively contain training protocols for the generalization of skills and for learning how things relate together in similar ways, or “equivalence.”  The fourth publication, due out in 2016, will address the ideas of making and comprehending more complex relations of things in their environments—relations that are not the same, or equivalent, but nonetheless are crucial to environmental understanding.  Dixon noted that a person’s ability to make these simple and complex relations are at the crux of acquiring, comprehending, and producing more sophisticated language.

Dixon knows these are challenging concepts, but let’s consider an example using 3 stimuli:

The phenomenon of learning equivalence relations is such that if someone taught you that stimuli A (word cat) is the same as stimuli B (picture of cat), and stimuli B is equal to stimuli C (cat sound), you, as a sophisticated learner can derive that stimuli A and stimuli C must be equivalent. The children we serve are often unable to make these connections without training.

With current strategies, all the stimuli relations in a child’s world must be taught, and that takes a considerable amount of time, effort, and money.  What if we had guidelines for teaching these derived relations of sameness, and all kinds of other relations like opposites and temporal relations (i.e.before and after)?  That’s exactly what Dixon has set out to do. Not only has he suggested what to teach, but he’s laid out how to teach it, example stimuli to use, and how to take data on prompts needed.

With a handful of scholarly publications in the works, Dixon has compiled very convincing data demonstrating the effectiveness of his work.  This data spans children in Southern Illinois who are both on and off the spectrum. He shows that children learned targets from the direct training manual, generalized skills, the ability to learn relations, and the ability to make the same relations with novel stimuli.  Most importantly, he asserts that these kids are “learning to learn” and not just employing rote memorization with little to no generalization.

Dixon’s efforts are drastically changing the way that children are able to learn and comprehend the world around them.  Considering all the relations that a person must derive every day there’s no argument that learning to truly comprehend the world around them will make them more independent across their lifespan. PEAK is revolutionary, considering some clinicians just “train and hope” for generalization across persons, contexts and environments.

For further information on PEAK visit their website at peakaba.com.