Autism and Epilepsy: A Possible Link 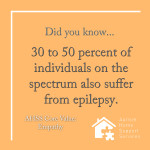 Part of the problem with defining autism is that the symptoms widely vary from child to child depending on how severely impacted they are. A high functioning individual on the spectrum will have symptoms that are much different than someone who is severely impacted by autism. There are also a wide variety of other aliments or disorders associated with autism. For example, many individuals on the spectrum also suffer from epilepsy, a brain disorder characterized by recurring seizures and convulsions. In fact it is estimated that thirty to fifty percent of the autistic population suffers from epilepsy. Many experts believe that brain abnormalities associated with autism contribute to seizures. However, research is ongoing to make this definitive link.

Unfortunately seizures can begin at any age. Some of the characteristic symptoms include:

Thankfully, most individuals on the spectrum do not have epilepsy. Hopefully, in the future when we understand what causes autism, we will be able to definitively explain why many individuals also have epilepsy.

Previous Post:   « How to Make Your 4th of July Autism-Friendly
Next Post:   How to Make Kids on the Spectrum Feel Included »