There are so many things I have to say about being the mom of special needs children that it’s hard to know where to begin. It is a very widespread topic – one, I know, that many don’t hear enough about. The reasons for that are likely that it is hard to talk about, and there is so much to talk about that people may not know where to begin, what to say, etc. 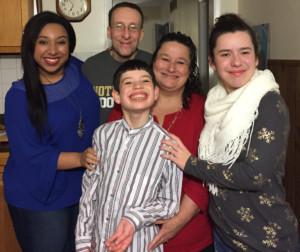 As a mother of two children with autism and other special needs, not only is it helpful for me to read and talk about the real lives of families similar to mine, it is healthy. It helps to know that you are not alone, and that in this journey there are others traveling with you. I have three children. My daughter Lexie (20) is neurotypical. My daughter Lauren (18) and son Erik (13) both have autism and other special needs.

Lauren is very high-functioning with autism and also has Tourette Syndrome. In spite of all her difficulties and differences, she has graduated from high school, received some scholarships, and is now at Northern Illinois University starting her freshman year.  I am so proud of her. She has had a lot of support throughout the years, and she has had some struggles, but she pushed through with all of our help. She is where she is today because of that, and she’s now studying to be an elementary teacher.

Erik is low-functioning with autism and also struggles from many other neurological and psychological challenges. He always has. Since the middle of his kindergarten year, he started going to a school for autism (that was the best thing for him). In September 2014, things took a turn for the worse and Erik started to develop other problems as well as becoming increasingly aggressive. In October 2014, he had his first hospital stay. For the next eight months, he was usually in the hospital.

We had to do something. Things were rough; Erik was sick; and I was beside myself.

We ended up getting him into a residential facility in Aurora (which is where we live) called Northern Illinois Academy. This was the hardest decision I ever had to make, but I knew it had to be done because Erik needed help. We all needed help. Erik has been there since May 2015, and he has really been doing well. He still has his ups and downs and his rough times, but we deal with them as they come.

Having children with special needs is hard. I cannot say it isn’t – especially when their issues are severe and there are many varying issues added on to their diagnosis. But I have learned:

But my children are also the biggest blessing of all.