Scariest Day of My Life – Elopement You’re Not Alone

It started with my mother screaming for my brother, Kevin, and I to go downstairs. She was hysterical; if someone only met her in this screaming, worried rage, they would have thought she was crazy. Kevin and I booked it downstairs. My mom went from screaming to hyperventilating and could only eke out the words, “Jennifer is gone.” 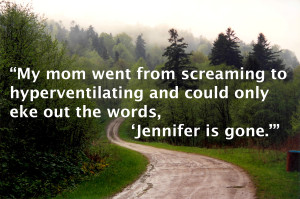 Those are words no one wants to hear. I would learn later that my Dad had been watching my sister, who is on the autism spectrum, outside in our backyard. He turned his back for perhaps a minute, and she bolted. Kevin and I got our shoes on and ran down the street in opposite directions. It took me about five minutes running at full speed to find her. When I caught up with her I asked her where she was going. “Stop & Shop,” she responded with a puzzled look on her face, as if I was an idiot for even asking the question.

Jennifer had asked us earlier if we could go to Stop & Shop, and my mother had told her we did not have to go there today because we had gone shopping the day before. Apparently, Jennifer was not satisfied with this answer and she was determined to go there herself. Puberty is hard on every child, but it is especially hard on autistic individuals and their families. Besides changing hormones, which necessitates changes in medicine, puberty also brings about a desire for independence.

This was the first incident of Jennifer leaving the house by herself and unsupervised. Jennifer is mostly nonverbal. She can say about 100 words spontaneously – although she is a lot smarter than people give her credit for. Just because she can not talk back to you does not mean she does not understand what is going on around her. Her intelligence combined with her athletic ability posed a problem for my family during her “running” elopement days.

We ended up having to chime all of the doors, so that we always knew if someone was coming or going. Jennifer even tried playing around with us at one point by opening and closing a door to make the chime go off, eliciting a rush of running feet outside. She was hopeful that eventually there would be enough false alarms so that we would not take the chime seriously. 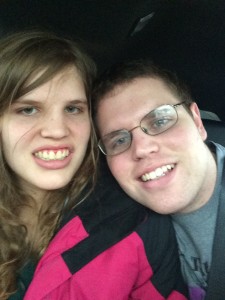 Jonathan and his sister

The worst of her elopement days actually happened at night. Jennifer is an impulsive human being. If she wants something she wants it right that second. If at 10 PM she wanted to go buy some Doritos, she was going to walk outside and try to go to Stop & Shop. To curb this behavior, my mom and I had to spend a lot of time driving Jennifer to stores at night to show her that “stores close late at night.” (We made the mistake of telling her at first that stores are only open when the sun is out. Jennifer took this lesson to heart and woke us up at 6 AM to go shopping.)

I love my sister. While her elopement days are now behind her, her desire for independence still exists. Every day is new territory with Jennifer. How do you deal with someone who wants to be independent, but probably will never have the necessary verbal skills or emotional maturity to be independent?

I do not have a good answer yet, except that we just take it one day at a time.

Previous Post:   « Bill for Mandated Autism Coverage Halted in Georgia
Next Post:   3.5 Million Individuals in America on the Autism Spectrum »