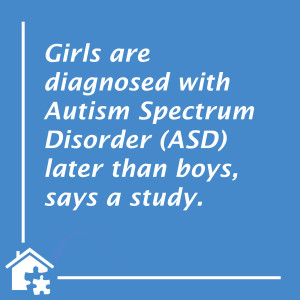 The reasoning was somewhat surprising, since this research team claimed later diagnoses could be explained by the fact that females exhibit less severe symptoms. The prevailing wisdom has been that there are less females on the autism spectrum than men, but the females were often more severely impacted. What then could explain the fact that females are diagnosed with autism at later ages than males on the spectrum?

Another possibility the research team brings up is that females on the spectrum often exhibit different symptoms than males. The symptoms might be of the same severity, but could be less readily apparent to a doctor. Only time and more studies will tell if the phenomena of females being diagnosed later than males will hold for the long term.

Previous Post:   « Why I Do What I Do — Working and Living with Autism
Next Post:   Recreational Activities For Our Loved Ones With Autism – Let’s get RECreative! »