“Foreign Concept”: What does Autism Awareness mean to my family?

Autism Awareness was an absolutely foreign concept to me 16 years ago when my son was diagnosed. There were only a few articles here and there in parenting magazines about the disorder. Slowly over the years, the rise in the prevalence of autism drew more media attention, which seemed to parallel my own experience learning about my son and the disorder. It wasn’t until 2005 that Autism Speaks was founded and the “movement” took off and gained the consciousness of parents in the U.S. I was reminded of this progress in awareness, during a recent trip to China. 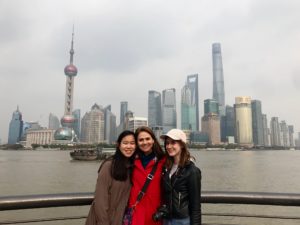 Maryanne & her daughters, Rose & Jane, on their China trip

I visited for the first time in 2005. During that first visit, I had the opportunity to speak with our guides, who were a few young women in their twenties who were either ready to have children or had a young child. During our conversations I explained that my oldest child had Autism. This pronouncement was received with blank stares. Not only could they not come up with the Chinese word for it, they seemed to have never even heard of such a thing. Even after I described his symptoms, behaviors, and treatments — nothing. They were simply and totally unaware of the disorder.

I recently returned to China on a trip with my daughters and, once again, our guides were young women and mothers. When asked why our son hadn’t joined us on our trip, I explained that he had Autism and the nature of the trip would simply be too much for him. Immediate recognition registered on each woman’s face followed by a reference to a friend or family member with an affected child. I had interesting discussions about treatments and therapies available in the United States. Not surprisingly, it seemed to be much more difficult for families to access services in China because of the cost (there is no private insurance).

So you may have noticed this month that Autism Speaks promotes the Light It Up Blue day and the Autism Awareness Month on the whole as an international event, and it truly is. We should all celebrate and applaud their efforts and the growing awareness of Autism around the world!