My Sister the Swindler – You’re Not Alone

Unlike a lot of autistic individuals, Jennifer, my younger sister who is on the autism spectrum, is manipulative. I remember one day coming home and finding Jennifer especially happy with herself. She had one of her classic grins. 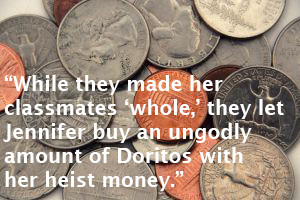 Knowing better than to ask Jennifer what happened that day at school (she only says about 100 words spontaneously) I looked at her “school journal.” Her teachers write in the journal everyday to tell us what the class, and Jennifer specifically, were working on. It also discusses any behavioral issues that occurred.

It turns out that Jennifer and her class had walked to the grocery store to practice life skills. Jennifer and her classmates had each received a dollar in coins. Jennifer loves Doritos and she wanted to spend her money on buying them. To her dismay she could only afford to buy the small snack-size bags of Doritos. This of course was not going to satisfy her impulsive craving for her messy orange delight,

She went to some of her classmates and traded them a nickel and a dime for their quarter. Her classmates thought they were getting a good deal, after all two coins must be better than just one! Jennifer, bought bags and bags of Doritos and was giddy the entire day.

The teaching aides almost stopped Jennifer from pulling off her grand heist. Her teacher stopped the aides from intervening. While they made her classmates “whole,” they let Jennifer buy an ungodly amount of Doritos with her heist money.

People underestimate Jennifer because she is nonverbal, but she is incredibly smart. I sometimes wonder what her life would be like if she could verbally communicate just as easily as you or I. I know one thing for certain; she would still have copious amounts of Doritos.

Previous Post:   « Tips for Parents of Children Newly Diagnosed with Autism
Next Post:   Adults with Autism Often Have Less Opportunity »