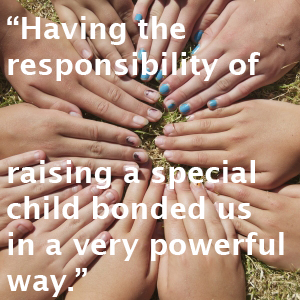 During Autism Awareness Month, I thought about how much my life has changed because of my son Drew’s autism and the things it has taught me. Immediately my thoughts went to all of the people that I’ve met because of Drew. Among them, the most impactful have been the fellow moms of children with ASD. I’ve been so fortunate to connect with these women whether it be at a preschool, a therapist’s waiting room, or in a grocery store mid-tantrum! I was able to develop a special bond with a number of women in my town by creating a support group.

It all started with a personal need to learn as much as I could about ASD and other disabilities. In the early 2000s, there weren’t a great deal of autism resources other than the Internet. So in search of more information, and the need to just get out of the house once a month and be social, we started a support group that eventually became known as the Circle of Moms.

We met in the back room of a local restaurant once a month to have a drink and share resources, laughs, and often tears. We came to appreciate that there are certain stories you can tell about your child that only a “Mom of” would understand. We had shared frustrations and fears that the mom of a typical child just couldn’t comprehend. Having the responsibility of raising a special child bonded us in a very powerful way.

Over the years I took so much from the support and fellowship of these women. They helped me survive the early years of Drew’s diagnosis and put us on a path that has made him the young man he is today.

So in honor of that group, I decided to put together a brief list of my favorite things we learned raising children with Autism:

By Maryanne Nugent, Autism Community Consultant for AHSS and mom of autism