Why I Love Being a BCBA: Jen Ryden 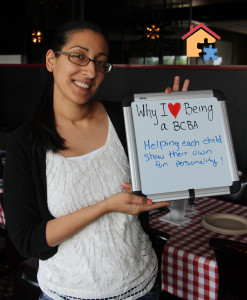 Before coming to Autism Home Support Services, BCBA Jen Ryden had worked in smaller ABA practices. Upon joining our team, she was happy to find a built-in community among her co-workers. “What I liked most is that it already had everything established. There was support, there were resources, there was a plan for everything so if I had a question I could get an answer and get support from the larger team,” she said.

Jen first started working in behavioral therapy through the CTM role. While she had no prior experience in the field, she realized she had good skills and decided to build on them by becoming a Board Certified Behavior Analyst.

“What I liked about ABA is that it just made sense. It’s not a technique; it’s more that all the techniques are founded in the theory of behavior. In the way we teach, there is flexibility, but I like that it works for everyone. I can see the difference it is making,” said Jen.

A specific client who was impactful during her career was a boy who was very capable, but didn’t talk a lot and displayed behaviors such as smashing items into windows. Through working with him, Jen and her team were really able to decrease those behaviors to the point that he had stopped the behaviors and he had maxed out all the skills on the assessment tool to an age-appropriate level.

“He started out as a kid that would just repeat the same phrases over and over again, and by the end of the program he would come up with brand new things to say and show off his unique personality,” she said.

Once a month, Jen gathers with other BCBAs and Lead CTMs in her region to discuss cases that might be difficult and strategize how to best work with clients. “All the BCBAs do isolated work so a lot of times I don’t get to see them or the Leads very often so it’s nice that we get this time to share,” said Jen. “There are people to reach out to rather than just doing this on my own.”

Jen’s experience working with AHSS has also translated in other aspects of her life. “I think one of the biggest things is that it’s not just a job; it’s something I enjoy doing. I’ll be watching TV and point out ABA therapy on TV. It’s not just a 9 to 5 that I get home and don’t think about ABA anymore,” she said. “I think it’s pretty rare to come home from work feeling better than you did before you woke up. It’s almost like a calling.”