Nolan is 7 years old. With therapy from AHSS, he’s able to enjoy everything life offers,
including having “Happy Birthday” sung to him at full volume after years of whispers.

Before Nolan began ABA therapy, he could only speak four or five words. And when certain people entered the room, Nolan acted like they weren’t there. He also struggled with things like playing with blocks and felt the need to jump off of things so often that Nolan’s parents feared for his safety.

“I was heartbroken and so sad for him,” said Nolan’s mother with a sigh. “I thought being diagnosed with autism meant that he would be alone and never be able to build relationships. It completely threw me off balance. I just wanted him to be OK.”

After being diagnosed, Nolan’s parents moved from Chicago to LaGrange Park to help Nolan get school and care options that weren’t easy to find in the city. One of Nolan’s teachers recommended AHSS.

“Autism Home Support Services was extremely professional,” Nolan’s mother  remembered. “They were so vested in Nolan’s abilities and dedicated to his  success. What’s even more touching to me is that they weren’t just committed to his well-being, but to my entire family’s.”

With ABA therapy from AHSS, Nolan began to learn the power of his voice. Instead of crying or yelling when he was upset, Nolan learned to express his emotions through communication.

Today he is able to say exactly what he’s thinking, really enjoys his friends and isn’t compelled to jump anymore, so he’s much safer. Best of all? Nolan is mainstreamed into general education classes for first grade — and excels at math.

“Nolan went from hiding under his blanket in a dark room in order to deal with sensory issues to standing on stage in the kindergarten musical, singing loudly to hundreds of people,” laughed Nolan’s mother. “I will never assume that he can’t do something ever again.”

Looking back on the ways that AHSS helped Nolan’s life, his mother reminisced, “It’s like AHSS took all of these spider webs of noise and doubt out of the way and helped my child walk into the moment. It was so beautiful and I’m so grateful. I have no doubt that these people changed the trajectory of Nolan’s life, and ours as well.” 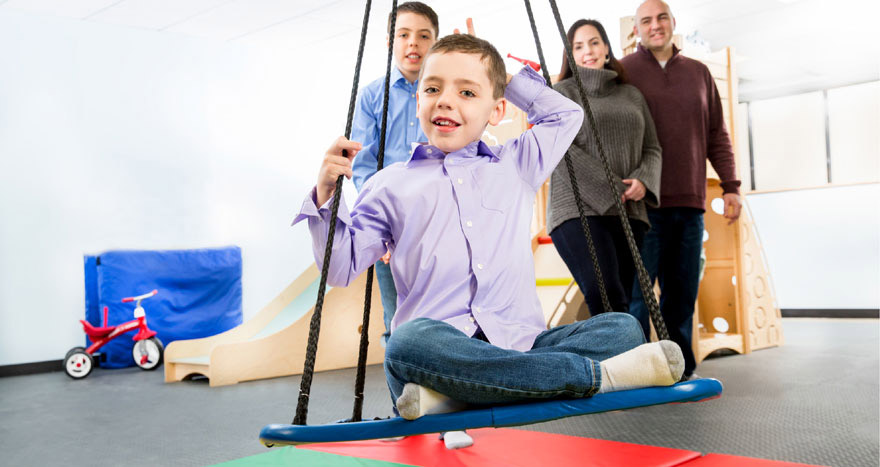 “I really believe AHSS brought my son to me. They made a path for me to get to him and for him to come out and explore the world. It started with a phone call.”

Family Stories From the Heart